The Secret Math Behind Google Shopping 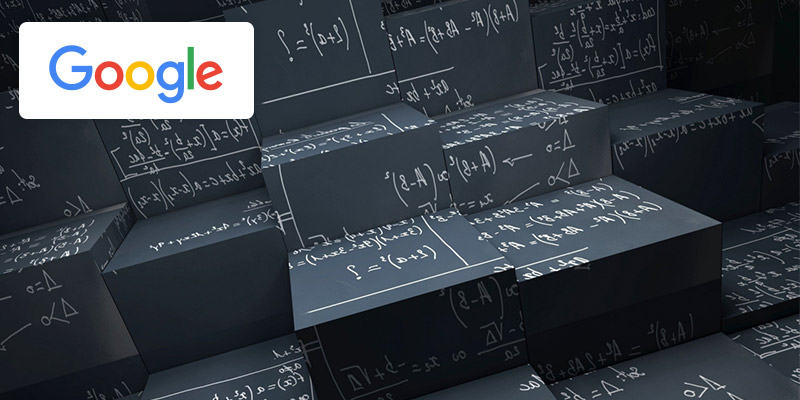 You are probably keenly aware (and just as keenly lament) that Google Shopping does not allow you to bid at the keyword level for your products. The burning question, then, is how does Google decide which product to show for a user search query, and perhaps more importantly, how can you utilize this information to chea.. err be more efficient.

Google has a goal function that they’re trying to maximize. To understand why Google shows who it does, we’ll have to put ourselves in their shoes. So pretend you’re Google – what do you care about? Peace on earth, world hunger, and most importantly, Profit.

Google makes money when someone clicks on one of the shopping ads below: 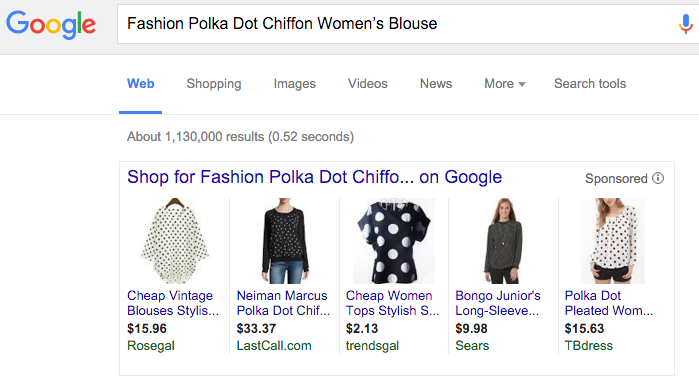 But not everyone clicks on an ad, so the question is: On average, how much money will Google make if it shows your ad for this query?

Google’s Profit for showing your ad for this particular search query is roughly the multiplication of the following terms:

In comparing the expected profit from two competing Ads, Google doesn’t have to take into account Total Search Volume, because it’s a multiplicative term on both competitors.

If all we’re trying to do is determine which one is higher, we can divide both by Total Search Volume

Great, so we know what the factors at play are, CTR|Query and Max CPC. Your control over both of these factors is HIGHLY dependent on your ability to manipulate your data feed.

There are a lot of factors that can affect the propensity of someone to click on your ad:

However, there’s an additional complexity that we’ve left out of the CTR equation. Confidence and Sample Size!

Google’s going to be a lot more confident in B’s CTR than A’s CTR, even though the sample mean is the same!

How much more confident you ask?

Assume each impression/click opportunity is a random variable with binomial distribution. Each such impression/click opportunity in a collection of such events is independent of one another… I’ll frustratingly leave the rest of the solution as an exercise for the reader ;). In actuality, the problem is found in all facets of life, from Quantum Physics, the basis of String Theory, to the Strong Force in Nuclear Physics. Don’t you wish you paid attention in your probability course now!

Because the sample size is small (and maybe because Google cares just a little about the satisfaction of its users), Google will use another factor to modulate its understanding of CTR|Query – textual similarity. Take two products:

Doesn’t it make sense that if someone searched for: ‘Long lasting cinnamon scented candle’, Product B is better than Product A? Definitely! And you may argue that the CTR|Query already takes this into account, that a user will more likely click on Product B if his search contains long lasting.

There are two main counter-points to this argument.

And that’s where Textual Similarity comes into play. It’s kind of like Landing Page Quality Score for Text Ads. At a high level, Google is making the assumption that users are more likely to be satisfied with Ads that are similar to their query.

Cosine Similarity – How similar is a query to a product

We’ve already begun the thought process needed to answer this question. Above, we noted that Product B was more similar to “Long Lasting Cinnamon Scented Candle” than Product A was.

Why? Well because Product B had more words in common with the query than Product A.

Again Product B is more similar to the Query. Why? This time the answer lies more in the semantic meaning behind the words (specifically Lens).

Here’s a summary of the stats:

First, I have to qualify that all of this will be a bit of an approximation. It’s very likely that at least some of the following are true:

Cosine Similarity – How good are matches? How bad are extra words?

Let’s get formal about it. There’s a notion in Linear Algebra called the Angle between two vectors.

If we convert our product titles and queries to word count vectors, we can find the ‘angle’ between them. A large angle would indicate a mismatch whereas an angle of 0 would indicate that the vectors are the same.

A difference of around 25%

A difference of around 7%

In conclusion, an extra word is a much smaller penalty than the penalty of missing a word!!!

Phew, we’ve gone through a lot of math, and maybe it’s not immediately apparent what we should do with our products to make more money. We’ve said quite a bit when all we were really trying to say was stuff your titles and product_types with the keywords you want to show up for.

You might be wondering if the same math works for channels like Amazon, Walmart, or eBay? The answer is yes, it works for any relevancy based search channel or marketplace!