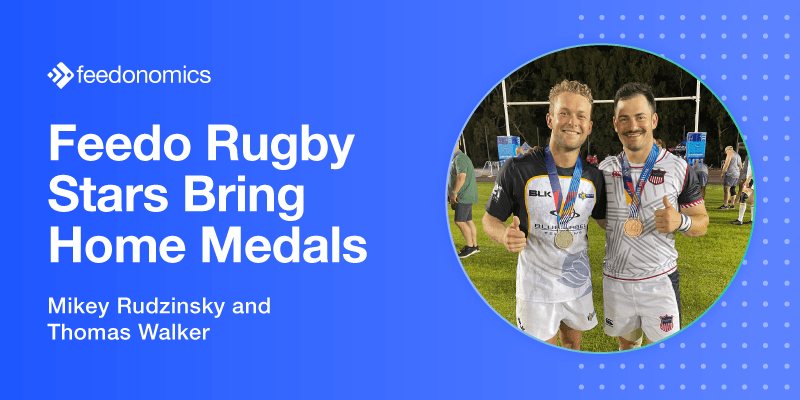 After being postponed in 2021, the Maccabiah Games returned this year to great excitement. More than 30,000 spectators gathered to watch athletes from all over the world compete in the third-largest international sporting event. We’re proud to announce that two Feedos, Mikey Rudzinsky and Thomas Walker, captained their countries’ rugby teams and won medals!

Rudzinsky, one of our Talent Acquisition Recruiters, captained the United States 7s team and won the bronze medal. Walker, our Strategic Account Director for the EMEA region, captained the South Africa 7s and 15s teams, and took home the silver and gold, respectively. 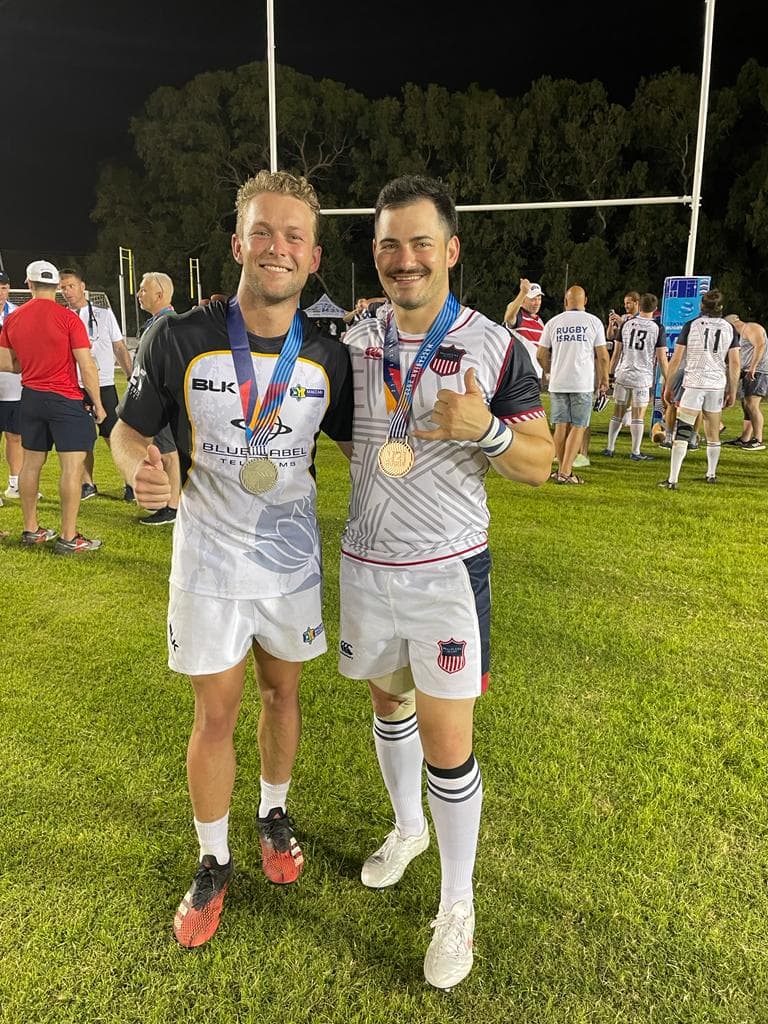 Walker (left) and Rudzinsky (right) celebrating after competing in their 7s game.

Having enjoyed the weeks of action-packed tournaments, we decided to sit down with the guys so they could share their stories.

Where are you from, and what got you into rugby?

Tom: I’m South African born and grew up in Durban. I’ve always loved sports, particularly team sports. Throughout my school years, I loved competing. That’s what actually drives me in everything I do today, although not so much on the sports field—as it was in high school and university—but in my everyday life. Not just to be the best, but rather to constantly try to better myself.

It was my father who got me into this great sport. From as young as I can remember, I always had a rugby ball in my hands or was on the side of the rugby field watching games. My dad had played professionally in his prime and later started coaching. Naturally, I attended those practices as a young boy. From those early days, with the constant support and encouragement from my family to play rugby, I started at the age of 7, and I never looked back. 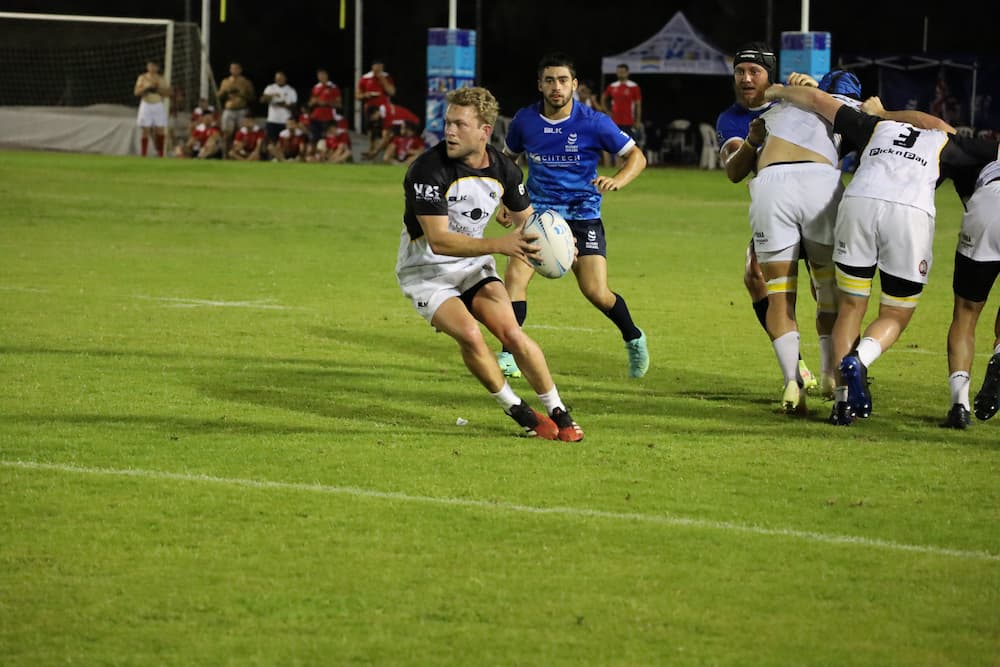 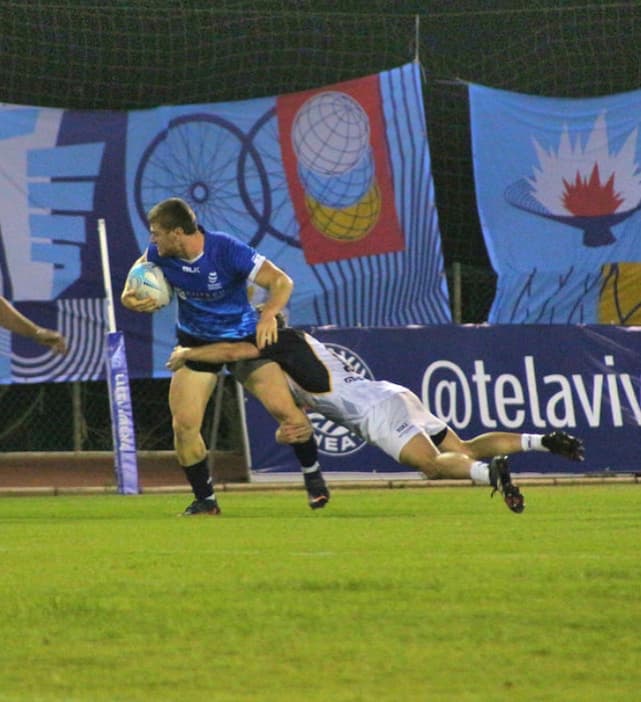 Mikey: I grew up in the Boston, Massachusetts, area (Wakefield/Reading, Massachusetts, to be specific) and spent my early years going to the rugby pitch almost every Saturday for “rugby day.”

My father started playing in 1980 when he went to the University of Rhode Island, and he continued playing for decades. I’ve been a part of Mystic River Rugby Club (my club team in Malden, Massachusetts) since birth and helped start Mystic River Youth Rugby with my dad when I was 12 years old. 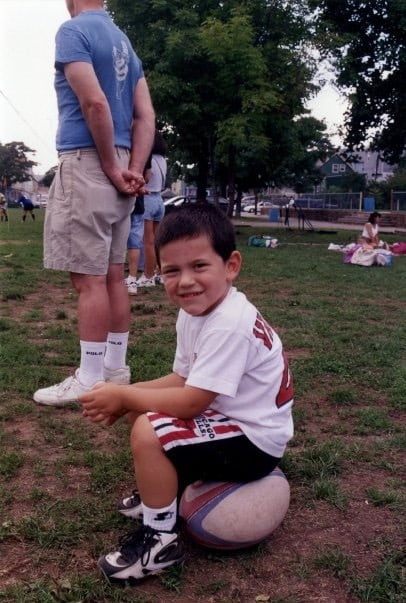 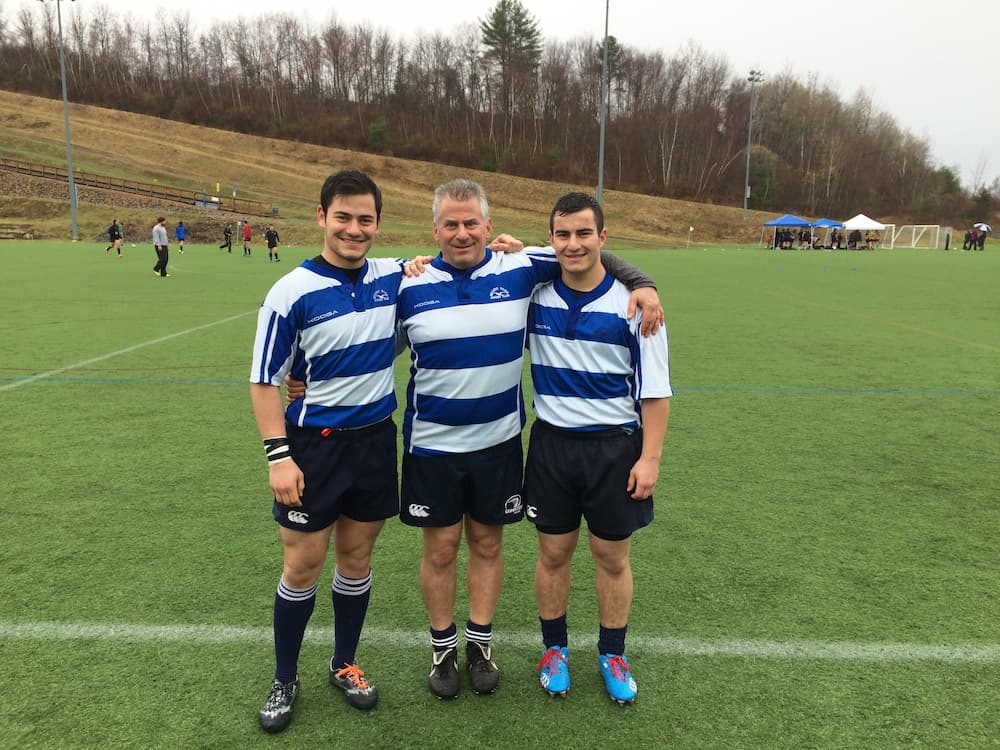 Rudzinsky as a child watching the rugby pitch. / Rudzinsky with his father and brother at a Mystic River Rugby Club meeting.

Who inspired you as a young athlete?

Tom: As a young kid who loved rugby, my idols were a mixture of three players. Ritchie McCaw was always my very favorite (I used to be a flank when I started playing, hence him being number one), followed by Fourie Du Preez and George Gregan.

Mikey: I was inspired by a lot of athletes growing up, but the two that stick out most would be Michael Jordan and Tom Brady, two GOATs! I also really looked up to my dad, especially from a rugby perspective.

Have you played in the Maccabiah Games before?

Tom: This was my first time at the Maccabiah Games… will it be the last? I don’t know. 😉 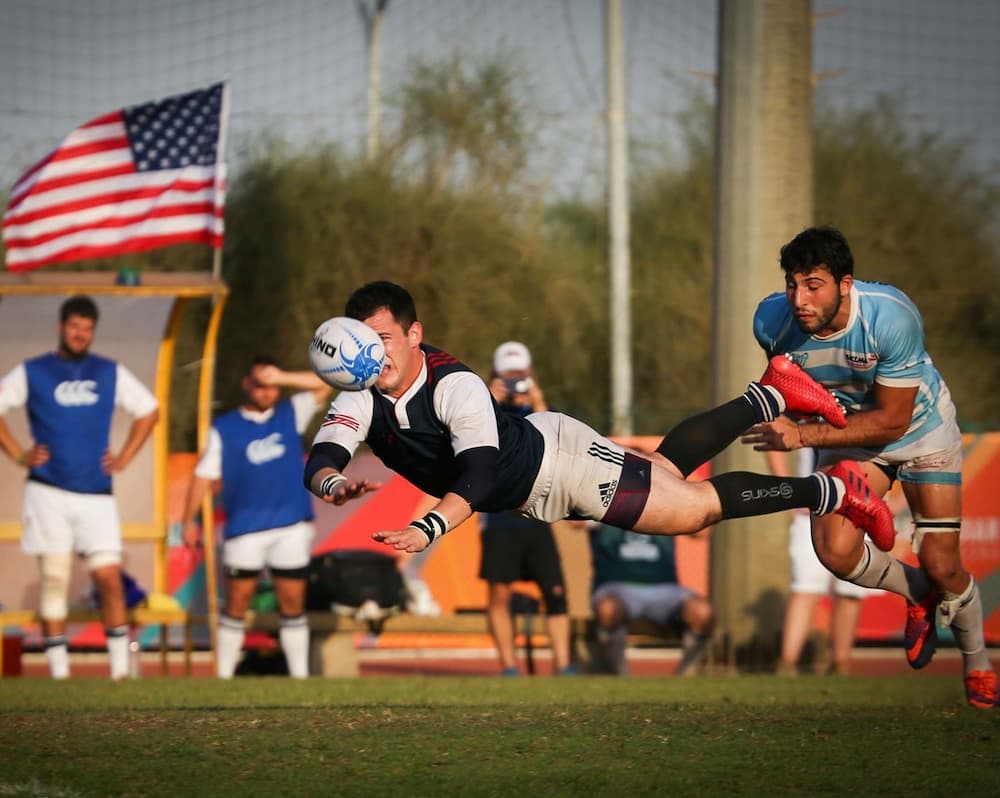 Tom: It’s always great to play against a friend. I enjoyed taking the pitch with Mikey—he’s a great player. But when you run onto the field, your mindset changes; you play to win regardless of who you’re playing against because your team comes first, and the result is important. Rugby is great because you give it your all for a grueling 80 minutes, and after that, you’re sharing a beer in the change rooms with your opponents, regardless of the results. After the game, Mikey and I were in arms together, and that was so great.

Mikey: Tom can flat-out play. The fact that both of us Feedos were chosen to captain our respective countries’ 7s squads and battle it out playing the same position in the first match of the entire games was an honor. Tom is a class player and was a fantastic leader for South Africa. I had fun lining up across from him and only wish we had another opportunity to play against each other in Israel. 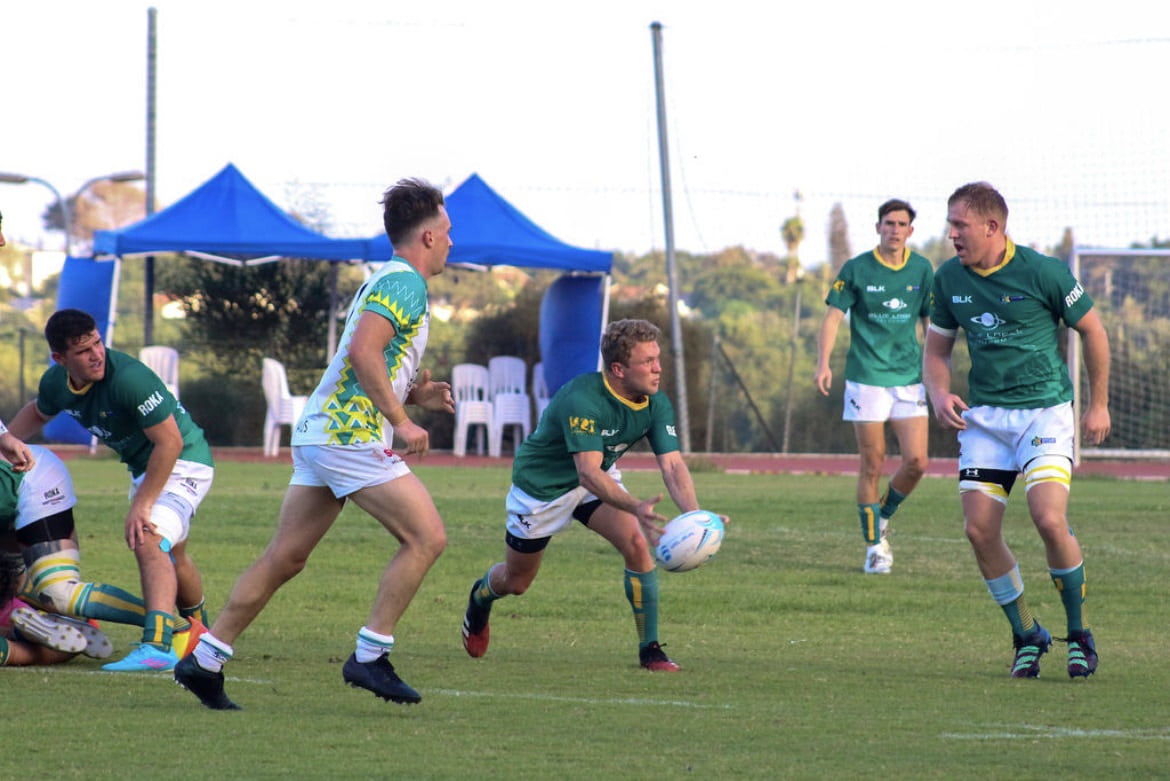 Walker tracks down the ball during the 15s match at the 2022 Maccabiah Games.

What’s your greatest achievement in rugby to date?

Tom: This is tough because, throughout the different stages of my sporting life, certain achievements meant a lot to me at that particular time. 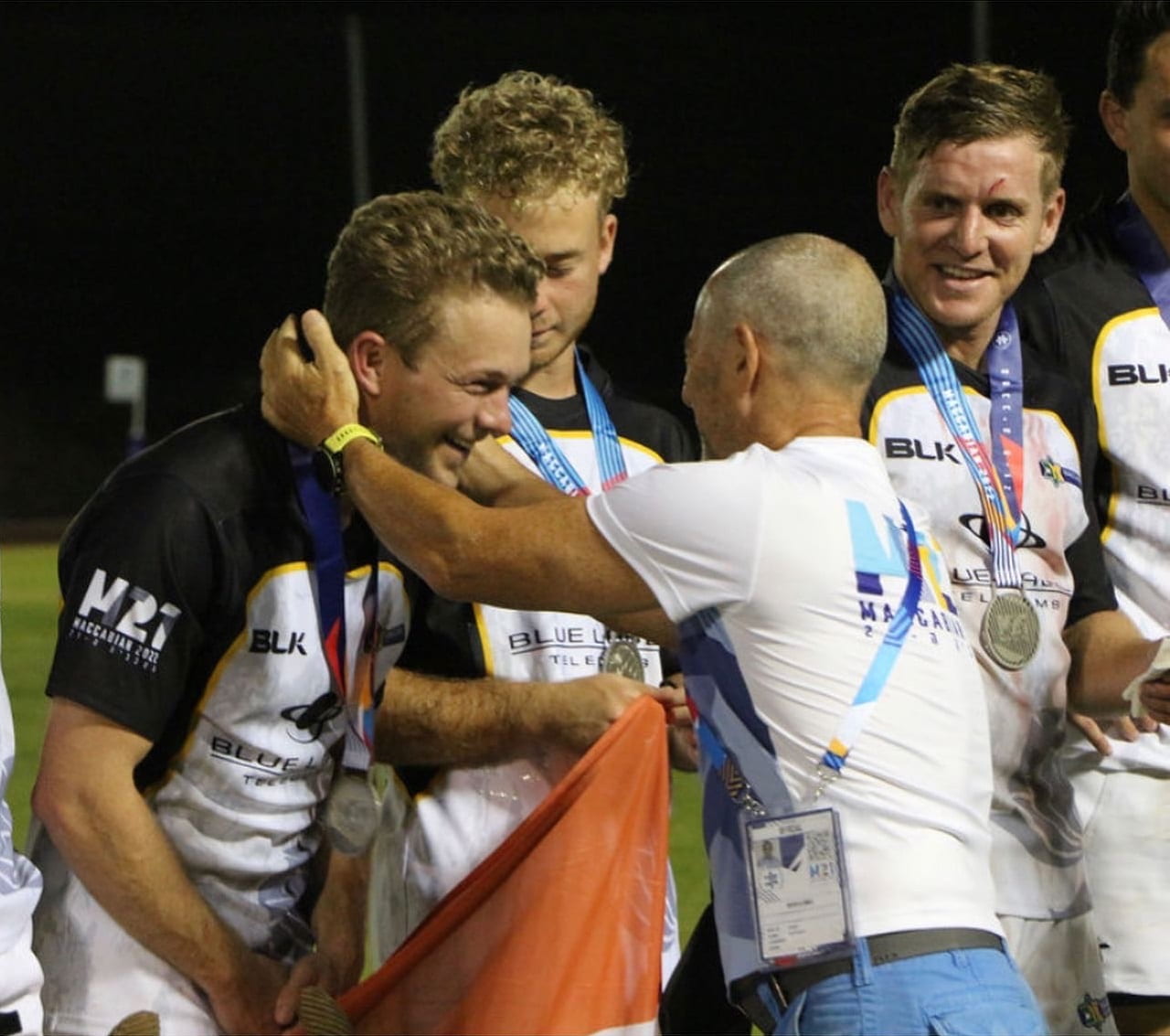 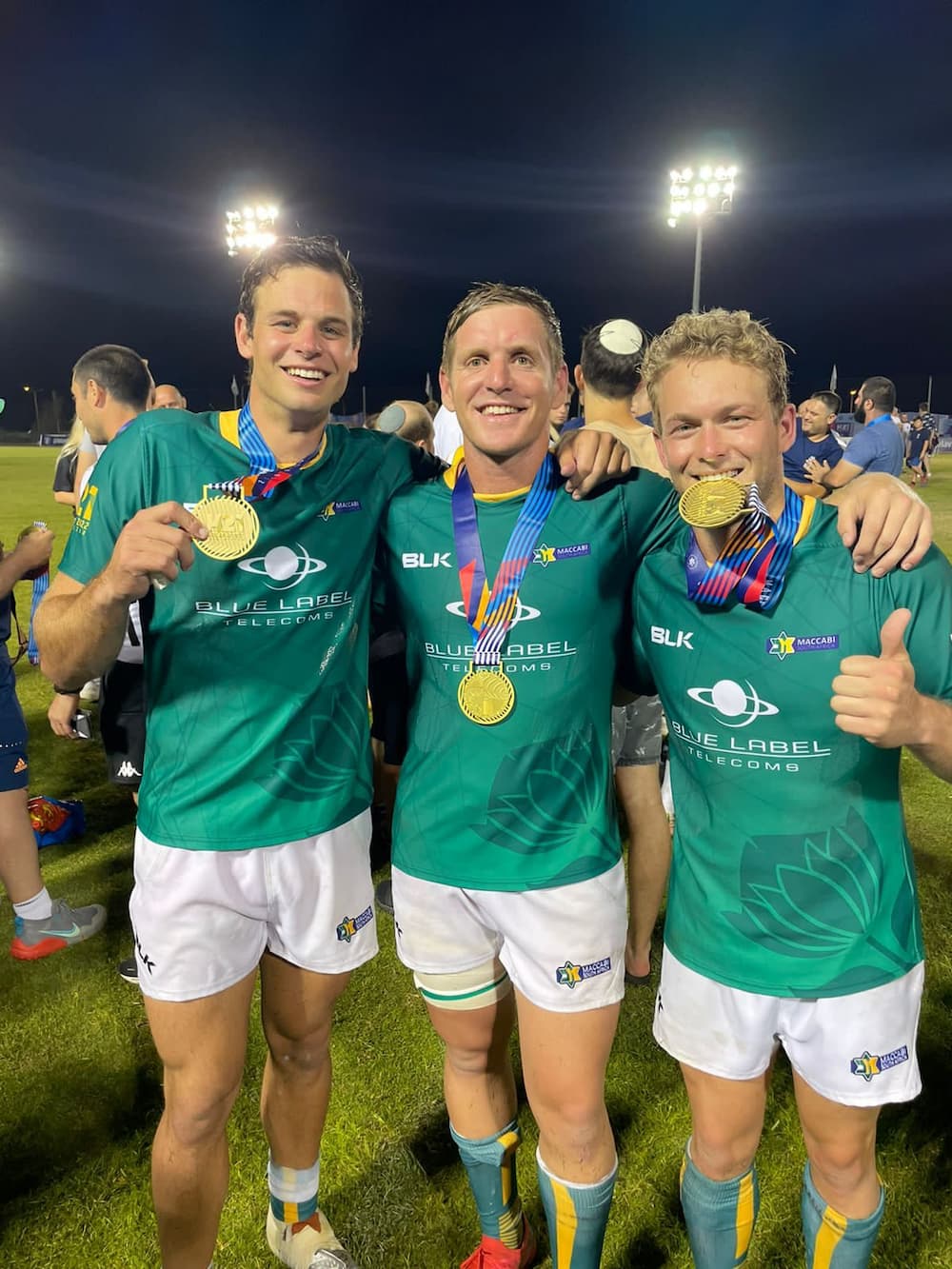 Walker being given the silver medal for his 7s match. / Walker and his team after taking home the gold for South Africa.

Mikey: Winning the 15s Gold Medal in the 20th Maccabiah Games in 2017 was the greatest achievement of my rugby-playing career.

Close runner-ups would be winning the 2018 USA Rugby Division 1 Club Rugby 15s National Championship with my lifelong club team, Mystic River Rugby Club. And lastly, having the opportunity to sign a contract and play for the New England Free Jacks’ first professional rugby team during their exhibition season from 2018 to 2019. 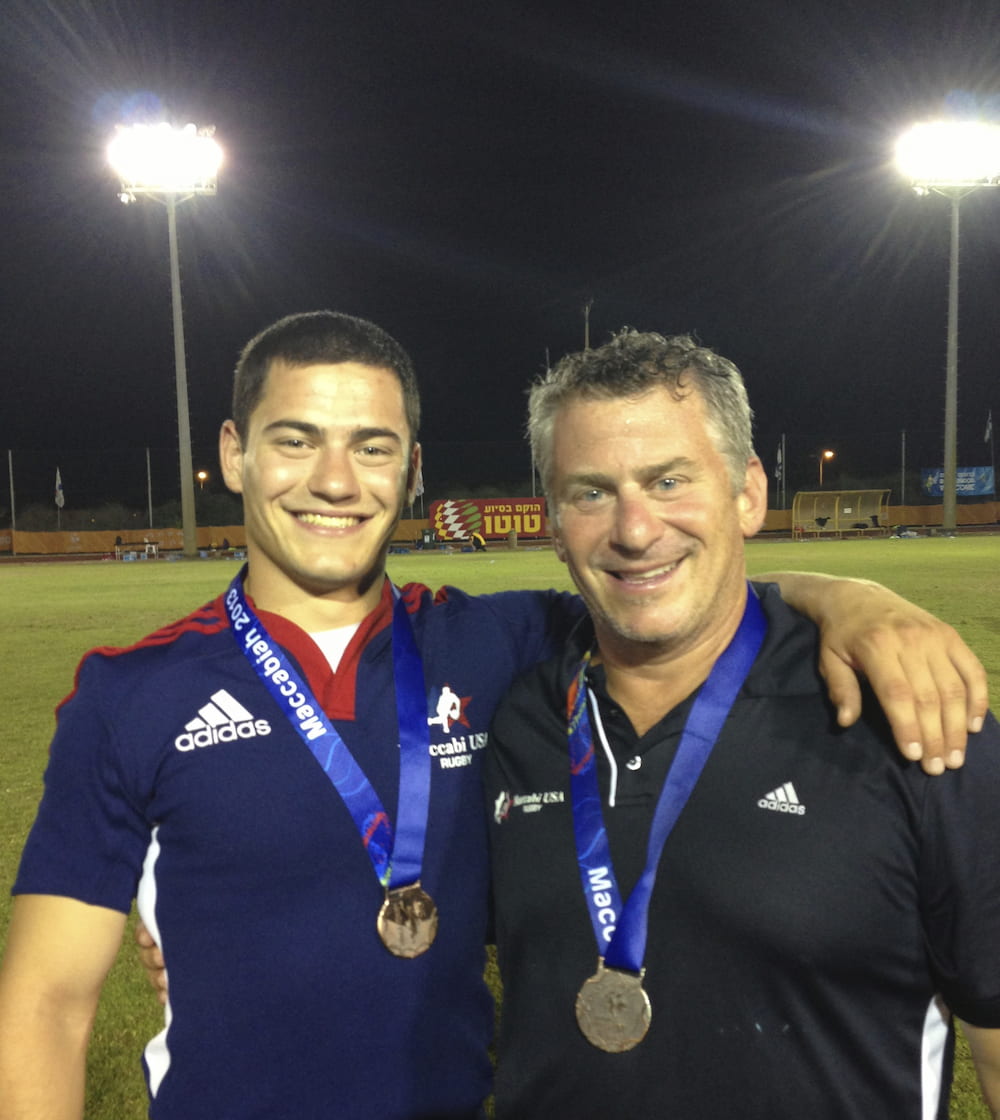 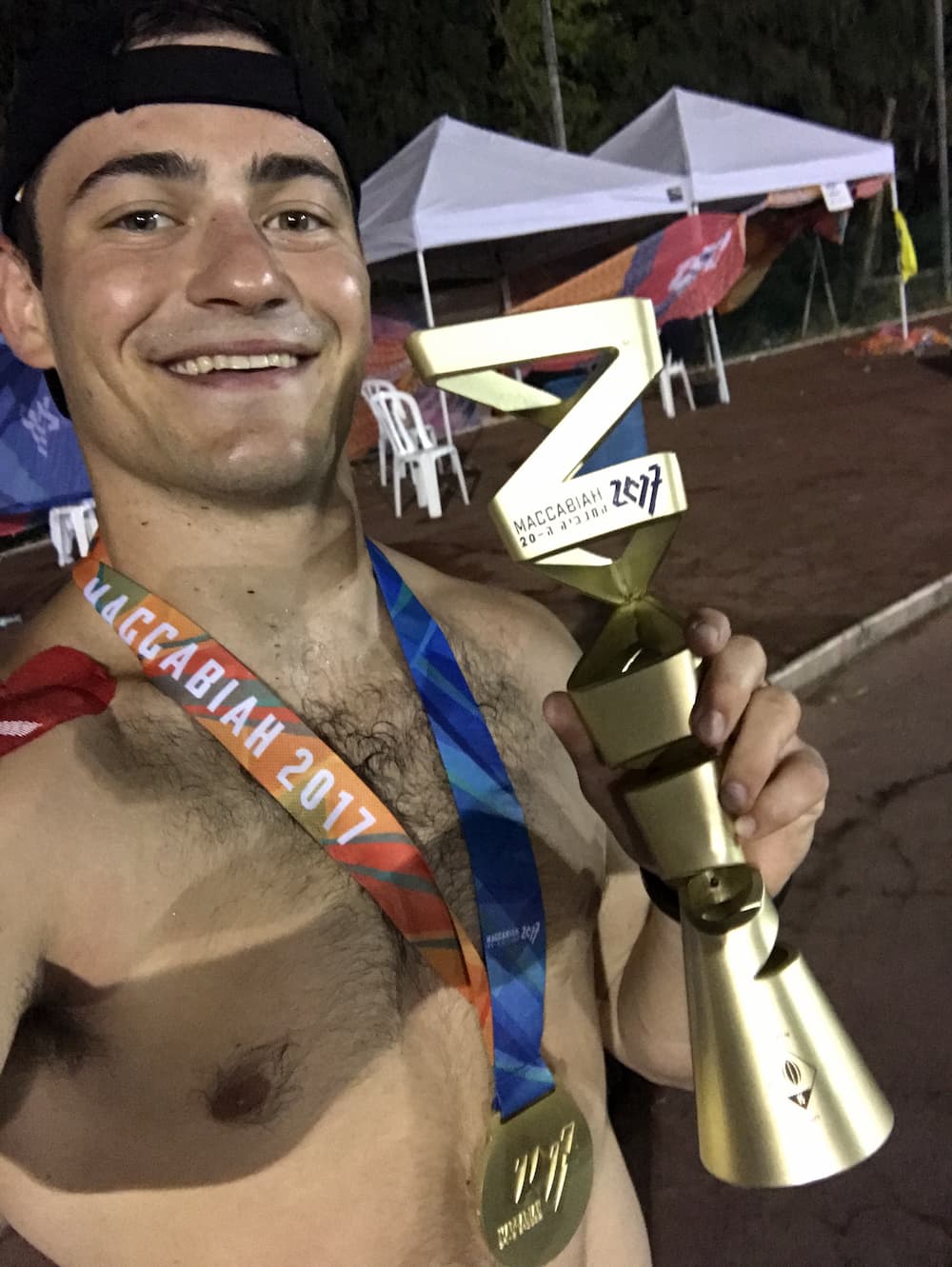 Feedonomics is proud to celebrate the accomplishments of our amazing team members! Interested in joining the team?

Tom: Being South African, I feel like I have to say, “having a braai,” which is great and I love it, but I am a huge fan of Italian cuisine… you can’t go wrong with a pizza or pasta!

Mikey: My favorite food is Chinese food from my favorite restaurant, The Baldwin Bar at Sichuan Garden.

What kind of music do you listen to when you’re training? Is there a song in particular you enjoy?

Tom: While training or going for a run, I hardly ever have earphones or AirPods in my ears. I think it can sometimes distract me, and I like to focus 100% on what I’m doing in that current moment. But on the rare occasion that I do, I generally listen to rap music. It tends to get me hyped.

Mikey: When I’m training, I mostly listen to hip-hop/rap. Lots of 50 Cent, Jay-Z, Kendrick Lamar, J. Cole, Wu-Tang Clan, Dr. Dre, and Eminem. My favorite song is “Many Men (Wish Death)” by 50 Cent; however, over the last year, I’ve listened to Tiesto’s Remix of “Dancing On My Own” by Calum Scott quite a bit… it just makes me want to move my body!

Do you have any secret talents?

Tom: I’d look at this as things that I enjoy. I love being active and around my friends and family. So that includes surfing, clay-pigeon shooting, wing-shooting, horse riding, golf, and always finding time to squeeze in a party.

Mikey: I can touch the tip of my nose with my tongue.

Tom: There are so many things that I’d like to tick off my bucket list. One of them is driving a Ferrari on a racetrack. I love supercars, and that would be the ultimate experience for me.

Mikey: Watching a New Zealand All Blacks match at Eden Park in Auckland. 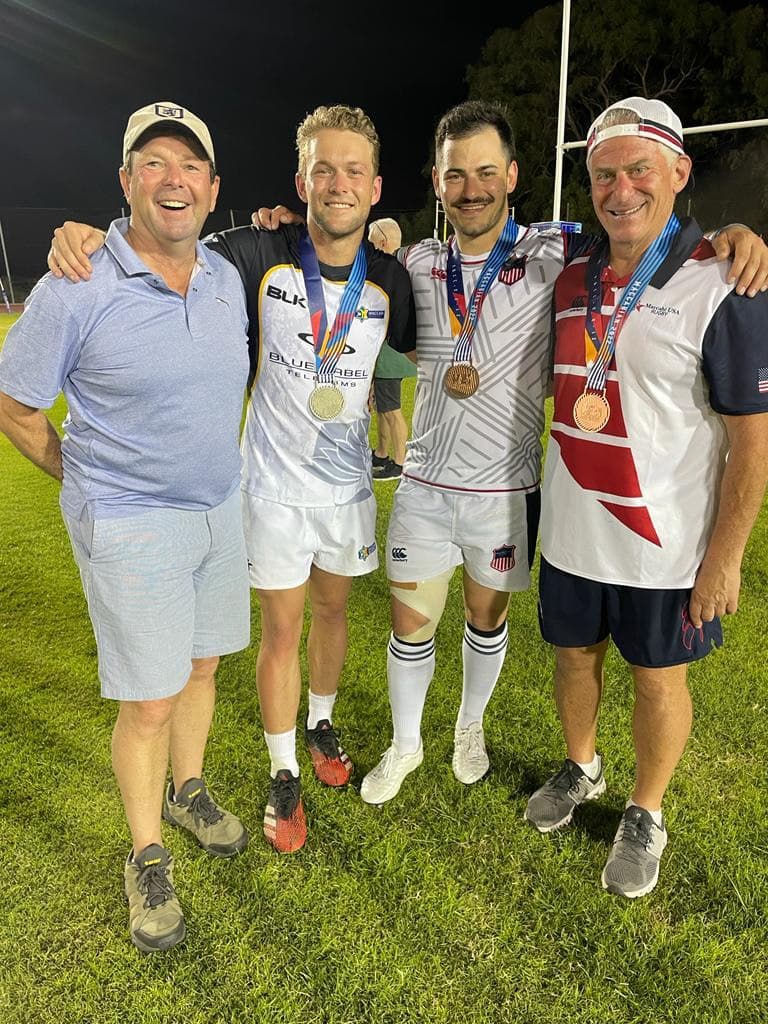 Walker and Rudzinsky with their fathers after their 7s match. Fun fact: Walker’s and Rudzinsky’s fathers played each other at the 1989 Maccabiah games!

With its leading data feed management platform, Feedonomics helps brands, retailers, and agencies optimize and list products on hundreds of shopping destinations around the world. Learn more about our full-service solutions for advertising channels and marketplaces.